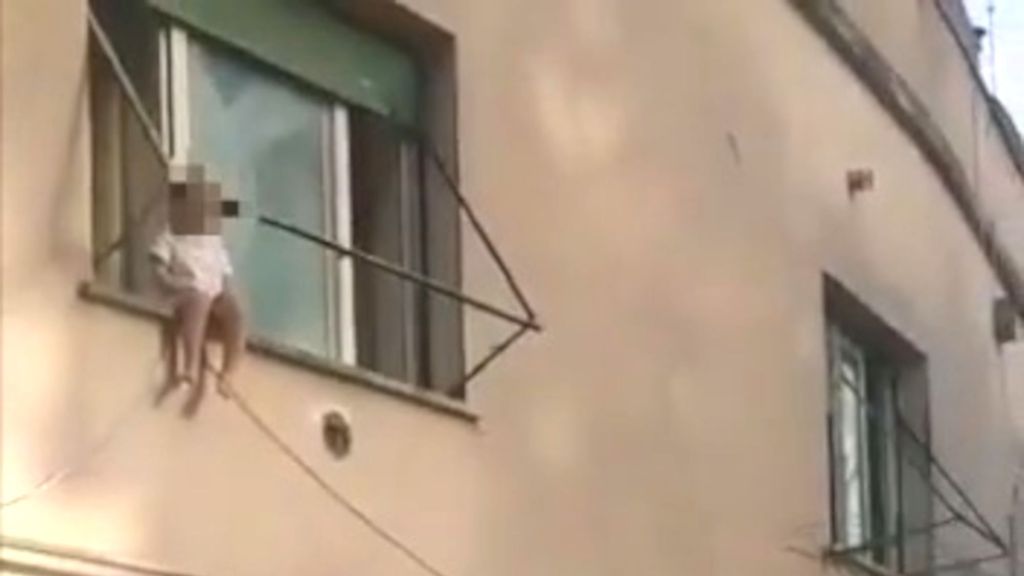 Italian police used their car to climb up and rescue a 2-year-old girl who was sitting on a window sill after her mother fell asleep.

Local residents noticed the toddler was sitting on the window sill with her legs dangling in the air on the first floor of a building in the Primavalle area, in the outskirts of Rome, Italy, on June 22.

The concerned residents immediately notified the police who arrived on the scene.

According to reports, upon arrival, the police rang the intercom of the apartment several times trying to find out whether there was someone else in the apartment taking care of the adventurous toddler.

Since the police received no answer, they wasted no time and positioned to rescue the young girl.

Moving the patrol vehicle as close as possible to the building, the police parked the car right underneath the window where the toddler was calmly sitting.

Two officers quickly climbed to the hood of the car, reaching out to the girl and trying to engage her in a conversation by asking her name.

The girl, who was identified as Sofia, was then safely brought down to the ground.

After the rescue, the toddler was entrusted to her father who arrived after the incident.

The police later learned that Sofia’s mother was in the apartment, but had fallen asleep. After the incident, she was allegedly interrogated by the police.

“Polizia di Stato” which is one of the national police forces of Italy, posted a video of the rescue mission with the message: “Another life saved. Sofia, who in these hours, risked her life and was saved by the decisive intervention of the policemen of the Primavalle District of Rome.”

They also said that Sofia remained calm through the whole situation and will probably not remember this incident when she grows older.

The video of the rescue mission posted on social media received over 2,000 comments thanking the officers for their quick response.

Sofia’s rescue came on the same day as the rescue of another 2-year-old child, a little boy from the Mugello region of Florence who had disappeared from his home earlier this week.

Nicola Tanturli’s parents reported him missing after they put him to bed and didn’t find him there a few hours later when they went to check on him.

After a search in the remote woods next to the Tanturli house involving thermal cameras and rescue dogs, RAI reporter Giuseppe Di Tommaso found the boy while en route to cover the story.

Police retrieved the boy from the bottom of an escarpment and found he had only minor bumps and scratches. An assessment at Mayer Hospital in Florence confirmed he was in good condition.

@danaparish @CDCgov @CDCDirector @chrislhayes just had her on @allinwithchris and roasted her pretty well. She got a little defensive at the end and was dodging questions, as she does. Apparently @CDC is tracking breakthroughs via Cobra claims? I dunno how much I buy it.
View on Twitter
0
0

The CDC must make a National Broadcast warning people to go get vaccinated.

We are out of time with variants looming.
@CDC
National Health Emergency
@POTUS
View on Twitter
107
0

"Masks help stop the spread of coronavirus...a literal layer between you and any virus in the air and can help prevent infection"
Here's why @CDC recommends wearing masks indoors even if fully vaccinated against COVID-19 https://t.co/E4nQiMoSS4 via @ConversationUS @PCH_SF
View on Twitter
0
0