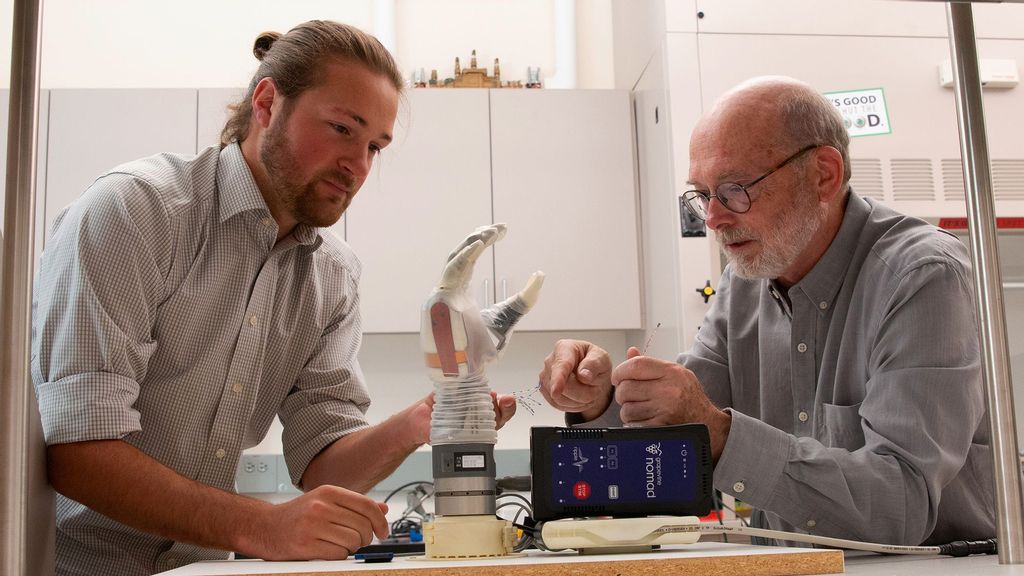 Technology for thought-controlled arms that allow amputees to touch and feel again is bringing a robotic hand from “Star Wars” within reach of becoming a reality.

A U.S. research team developing the cutting-edge prosthetic is bringing Luke Skywalker’s robotic hand, seen at the conclusion of the film “The Empire Strikes Back,” closer to real-life use.

The collaborative effort to mimic human arms with synthetic replacements has some major advancements within its grasp, according to Gregory Clark, an associate professor in biomedical engineering at the University of Utah.

A team of specialists has been creating innovative methods to attach robotic arms to amputees at the university’s Center for Neural Interfaces.

Connecting artificial limbs to a person’s neural function is a complicated process, involving linking specific electrodes to specific nerve fibers to create the correct perceptions from the recipient’s brain.

The brain adjusts and learns to effectively manipulate the new arm over a short period. But that is not the end result the team is looking for, Clark said.

“Our goal is to make it so that the hand moves exactly the way your biological hand moved. If we could do the perfect decode of the signals coming down and translate that perfectly into moving the hand, the person wouldn’t have to learn anything new,” he said. “We are not there, but that is what we are shooting for.”

For now, the connection between the LUKE arm and the recipient is close to being biologically accurate. Recipients are engaging in dexterous movement within a remarkably short training time for both the recipient and for the onboard computer that translates signals between the arm and the person.

Every case presents a different set of conditions. Amputations occur at different places on the arm, retaining differing amounts of muscle bulk. Also, compensating for the subjective translations of pulse codes varies among recipients.

The LUKE arm was originally developed with funding from the U.S. Defense Advanced Research Project Agency by DEKA Research and Development, a company created by Segway inventor Dean Kamen. Now manufactured commercially by Mobius Bionics, the arm currently holds 19 sensors. But the embedded array the team is implanting has 300 electrodes — although not all of these connect successfully in the attachment procedure.

Having this many possible connections goes a long way toward mimicking a living human hand, which possesses thousands of sensors. When technological advances enable the LUKE arm to include more, the intricacy of signals being passed back to a person will increase many times.

Since the first results of the study were published, the team has been able to hone their work through a new study participant who underwent an elective amputation of a damaged hand.

The ability to be there at the beginning of the process where neural memory is still strong has allowed many advances, and the participant was able to keep the implants for almost a year-and-a-half, furnishing the team with many more real-world insights into the process.

Recent regulatory advances in approval from the U.S. Food and Drug Administration allow people to keep the implants longer and take the prosthetic home to use unsupervised. This has allowed test subjects to incorporate the prosthesis into their own body image and become far more comfortable with the device as a permanent part of themselves.

A new round of test subjects will now be able to extend the knowledge the team gains on long-term use. Thus, the dream of synthetic arms as perfect biological replacements draws closer.

“We hope to restore not only these somewhat potentially prosaic senses of touch or the ability to move, but even the sense of self,” said Clark.

“One of our participants once remarked that losing your hand is like losing a family member that you loved except you are reminded of it every day, and so if we could bring their hand back to life, it will have that kind of impact as if a key part of them was gone but has now returned.”

(Edited by Matthew B. Hall and Judith Isacoff)

Two pubs I helped write on the airborne transmission of SARS-CoV-2. Both have been highly read (one is ranked #21 and the other #23 overall by Altmetric). How are @CDC and @WHO continuing to ignore all evidence that #COVIDIsAirborne?
https://t.co/XSbcKiDXoi
View on Twitter
67
0

@noorchashm @huegel_valerie @TuckerCarlson @SenRonJohnson @CIA @StateDept @cdc That's part of the problem we are comparing vax to covid when it shouldn't really be that way.

There are many effective therapeutics out, backed by studies and data from front line clinicians, that are highly safe and effective against Covid.