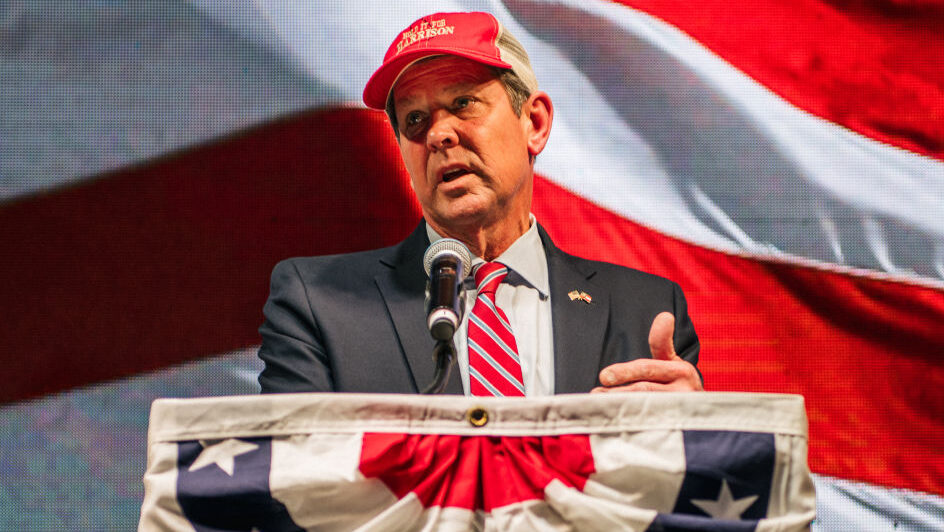 Out of power and in disarray, some Republicans have battled “woke” corporations. But is the GOP ready for a break-up?
The post Republicans Threaten Break-Up With Corporate America, But Some Question Their Sincerity appeared first on Zenger News.

When Senate Minority Leader Mitch McConnell (R-Ky.) issued a warning to corporate America on April 6 to “stay out of politics” after some companies voiced opposition to controversial new voting laws in Georgia, he added a caveat.

Coming amid a flurry of attacks by Republican leaders against Georgia-based companies like Coca-Cola and Delta Air Lines — and even Major League Baseball — the remark highlighted the strange corner into which the GOP had backed itself.

But it also hinted that the threats to American big business from its longtime legislative champions — and beneficiaries — in Congress may not be coming from a position of strength, according to Jeffrey A. Sonnenfeld, a business professor and senior associate dean for leadership studies at the Yale School of Management.

Instead, the spectacle may point more to the state of the GOP, he told Zenger News.

“But then the GOP seems to have lost its bearings for its own well-being, as they now joust with their party’s own successful ideological and political standard-bearers.”

The new voting laws were introduced in the wake of former President Donald J. Trump’s loss in the 2020 presidential election, which the former reality television star and real-estate developer claimed was due to voter fraud, including in Georgia.

Among other measures, the bill restricts the use of drop boxes, mandates proof of identity for absentee voting and outlaws giving water to voters standing in line.

Opponents of the law have argued the changes are intended to target black voters in Georgia, who in last year’s election played a decisive role in the Democrats’ win in the state. (Trump joined former President George H.W. Bush as the only two Republican presidential candidates to lose Georgia since the 1980 “Reagan Revolution.”)

Democratic Party leaders notably slammed the law as reviving segregation-era efforts to restrict black people from voting, which helped roll back civil-rights progress made during the federal government’s Reconstruction program after the 1860s civil war.

“Just look through it and look throughout history, and you will know that what is taking place today is a new Jim Crow,” House Majority Whip James E. Clyburn (D-Ga.) said recently, referring to segregation laws in Southern states from the 1870s to 1960s.

“This law, like so many others being pursued by Republicans in statehouses across the country is a blatant attack on the Constitution and good conscience,” Biden said.

However, Republican lawmakers did not become incensed until more than a dozen companies, including several headquartered in Georgia, came to the party.

Delta Air Lines CEO Ed Bastian wrote in a memo to employees that “discussions with leaders and employees in the Black community” made it clear the bill would “make it harder for many underrepresented voters, particularly Black voters” to vote.

“That is wrong,” Bastian wrote.

Coca-Cola executive Alfredo Rivera echoed that it could “lead to voter suppression.”

“As soon as Georgia’s legislature convened this year, our company joined with other Georgia businesses to share our core principles,” Rivera said. “We opposed measures that would seek to diminish or restrict voter access and we advocated for broad access, voter convenience, election integrity and political neutrality.”

The league also moved its 2021 draft, a part of the All-Star festivities, because “Major League Baseball fundamentally supports voting rights for all Americans and opposes restrictions to the ballot box,” according to commissioner Rob Manfred.

Oscar-nominated actor Will Smith’s production company, meanwhile, moved the filming of its upcoming film “Emancipation” from Georgia due to the new laws.

“The new Georgia voting laws are reminiscent of voting impediments that were passed at the end of Reconstruction to prevent many Americans from voting,” Smith and Antoine Fuqua, the film’s director, said in a joint statement on April 12.

The response from GOP leaders was swift.

In Georgia, Republican state lawmakers threatened to rescind tax breaks given to Delta to keep their headquarters in Atlanta. Across the nation, Republicans and conservative media commentators threatened to stop drinking Coca-Cola beverages.

Sen. McConnell attempted to give some weight to his warnings to corporate America by raising the prospect of “serious consequences” for companies that become “a vehicle for far-left mobs” by publicizing their business decisions.

Corporate America, the self-titled “Grim Reaper” of the Senate said, was “dabbling in behaving like a woke parallel government,” and Republicans would not stand for it.

“With their capitulation to the left-wing Twitter mob and support for Biden’s big lie about election integrity, they’ve forfeited any right to an anti-trust exemption,” Hawley said, arguing that any foray into politics was an abuse of its artificial market power.

Yet some have questioned the wisdom and sincerity of the GOP’s efforts to take the fight to big business over what it sees as “woke” issues, pointing to the party’s history of defending the freedoms of corporations against government encroachments.

Andrew Gawthorpe, a professor of history and international studies at Leiden University in the Netherlands, said Republicans may ultimately take some “nuisance measures” against businesses to show a Trump-loving base they can fight.

But he said Americans should not expect a “full-blown divorce” that pushes big business from the embrace of the Republicans to the Democratic Party.

“It’s not like this is going to lead to a definitive, massive break between the GOP and business,” he said. “At the end of the day, businesses want influence in the corridors of power, so they’re going to keep giving money to people who they think will win.”

“What we’re seeing more of is shifts around the edges and an increasing willingness by business lobbying groups, like the Chambers of Commerce, to give Democrats a chance,” he added, “even if they won’t cut their ties to the GOP completely.”

Beyond that stands McConnell’s caveat about corporate campaign contributions.

The 147 Republican lawmakers who objected to the Electoral College results in Trump’s loss last year received around $68 million in contributions from political action committees, or PACs, tied to big business in the 2020 election season, accounting for 16 percent of their fundraising, according to the Center for Responsive Politics.

Additionally, McConnell himself raised more than $4.3 million in corporate cash donations between 2015 and 2020, while Cruz took in over $1.2 million. Rubio, too, received more than $2.3 million from business PACs during those years.

Business-linked PACs also gave 57 percent of their contributions to Republican candidates during the 2020 presidential election cycle.

Prior to Trump’s rise, the GOP and its leaders have also long opposed campaign finance reform efforts intended to force corporate America to “stay out of politics.”

In 2003, McConnell went so far as to personally file a lawsuit against laws that limit the ability of companies to influence political decisions through money. He also demanded that the Supreme Court strike down the Bipartisan Campaign Reform Act.

Rather than issuing warnings to corporations, McConnell praised the decision.

“For too long, some in this country have been deprived of full participation in the political process … the Constitution protects their right to express themselves about political candidates and issues up until Election Day,” McConnell said.

The GOP’s opposition to Biden’s infrastructure plan also appears to signal that the party may not be ready to completely sever ties with corporate America.

Biden has called to increase the corporate tax rate from 21 to 28 percent to fund his $2 trillion proposal. However, GOP lawmakers who backed Trump’s reduction of the tax rate from 35 percent in 2018 have already voiced opposition to the plan.

“I’m going to fight them every step of the way, because I think this is the wrong prescription for America,” McConnell said at a recent news conference.

The dichotomy has already led some politicians on the left to claim hypocrisy.

“Imagine that, after a trillion dollars of tax breaks for large corporations, lowering the corporate tax rate, after protecting the pharmaceutical industry for charging us, by far, the highest prices in the world for prescription drugs,” Sanders said in a TV interview.

“Mitch McConnell and his friends are very upset that some corporations are now saying that it is an outrage that, in Georgia, they are trying to destroy Democracy.”

McConnell’s warnings of “consequences” for “woke” businesses simply showcases a desire among Republicans to “have their cake and eat it, too” by telling corporations to “stay in their lane” while accepting donations, according to the Center for Responsive Politics, a Washington, D.C.-based non-profit that monitors donations and lobbying.

It accused McConnell of engaging in the exact overreach he has decried.

“A corporation’s goals are unlikely to perfectly mirror those of McConnell or any other single politician,” the center said in a statement to Zenger. “Major corporations develop extensive legislative agendas and strategies for achieving their goals, and that is unlikely to change based on the statements of one member of Congress.”

Georgia’s passage of the new voter law comes after the state has experienced record-breaking turnout during the 2020 election, leading the state to vote for a Democratic president for the first time since former President Bill J. Clinton’s election in 1992.

It came on the heels of Georgia claiming the largest voter-turnout increase of any U.S. state during the 2018 midterm elections, due to efforts led by former Democratic gubernatorial candidate Stacey Abrams to register more black people to vote.

Sonnenfeld, the Yale business professor, said he believed Republicans would be better served reflecting on why it is losing elections in its onetime Southern strongholds, as well as its goodwill with the business community, instead of engaging in spectacles.

“The resolve of the business community has only strengthened with the collective force across industries as a gathering storm against extremism,” Sonnenfeld said. “The GOP has to work its way back from the fringe of the party to the center where the nation’s needs, their patriotic principles and their historic legacy lie.”

The post Republicans Threaten Break-Up With Corporate America, But Some Question Their Sincerity appeared first on Zenger News.