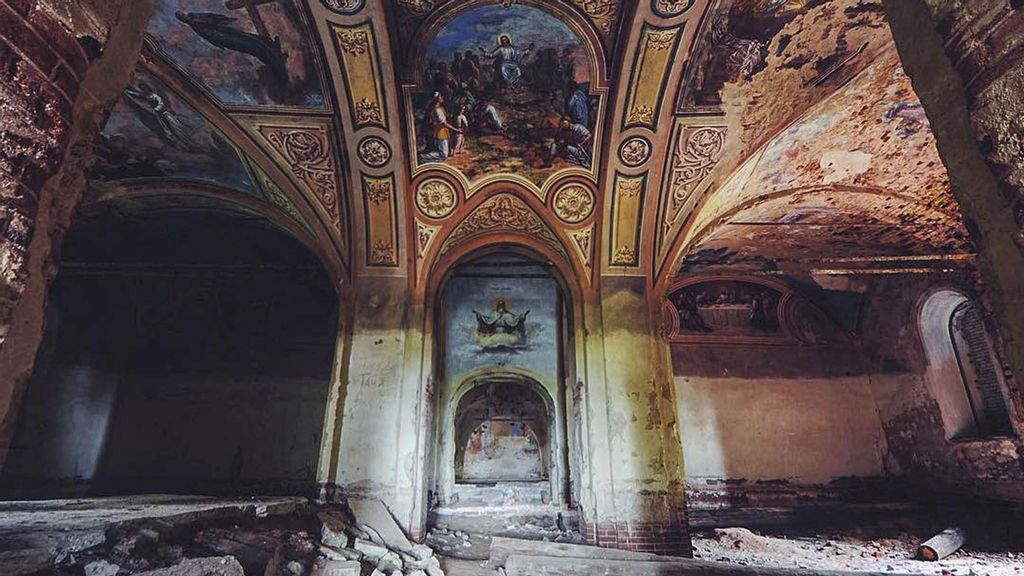 Even after decades of decay, abandoned Russian churches retain their beauty. A Russian photographer has documented the country’s fast-vanishing religious heritage and captured its artistry.

Some structures, in the middle of fields or hidden in forests, date back hundreds of years.  The hand-painted walls crumble and the stained-glass windows disintegrate, but their faded majesty endures.

Alexander Sukharev, who has a passion for photographing abandoned buildings and structures overgrown by nature, is the man behind the camera.

“Sometimes you go into a church and find yourself in a former warehouse for auto parts, and sometimes you find yourself in halls where it looks as if it had been rearranged, so discos could be held there,” said Sukharev, who is from Moscow. “Sometimes, you would even find a statue of Lenin stood beside Jesus on the cross.”

Many of the churches photographed were targeted by the anti-religious Communist Party in the 20th century, before being looted in the 1990s during the collapse of the Soviet Union.

Each church has its own story.

The Church of the Intercession of the Holy Mother of God in the village of Zamoshie was built in 1812 and remained open until the 1930s. The church bells were destroyed in 1937, and heavy machinery was used in an effort to destroy the building. However, the building somehow survived and was turned into a storehouse for grain.

Though the Church of the Intercession in Zamosh and the Church of St. John the Theologian in the Kaluga region survived the 1930s, they were shut down in 1961 by local authorities, who also removed all iconography.

The Church of the Kazan Icon of the Mother of God in the village of Kurba in the Yaroslavl Region was closed in 1929-1930. In subsequent years, the church collapsed. Plans were developed in 1988 to restore the building, but work was put on hold in 1993 and remains undone.

While the churches have been abandoned, occasionally people still visit them, Alexander said.

“Visiting abandoned places allows you to connect directly with history,” he said. “This experience is more impactful than any sort of history class you might be given at school.”

Dear @cdc @fda, if boosters are a good idea, great, but, maybe vaccinating kids like my 11 year old might help curtail the spread a bit better?

Can you hook me up, please?
View on Twitter
0
0

@BelkissObadia @RandPaul @cdc 1. Not a photo of Paul being vaccinated for COVID; 2. He is not anti-vaccines, he simply says people with previous infections have better immunity than vaccinated people with no prior infection - this has been confirmed
View on Twitter
0
0