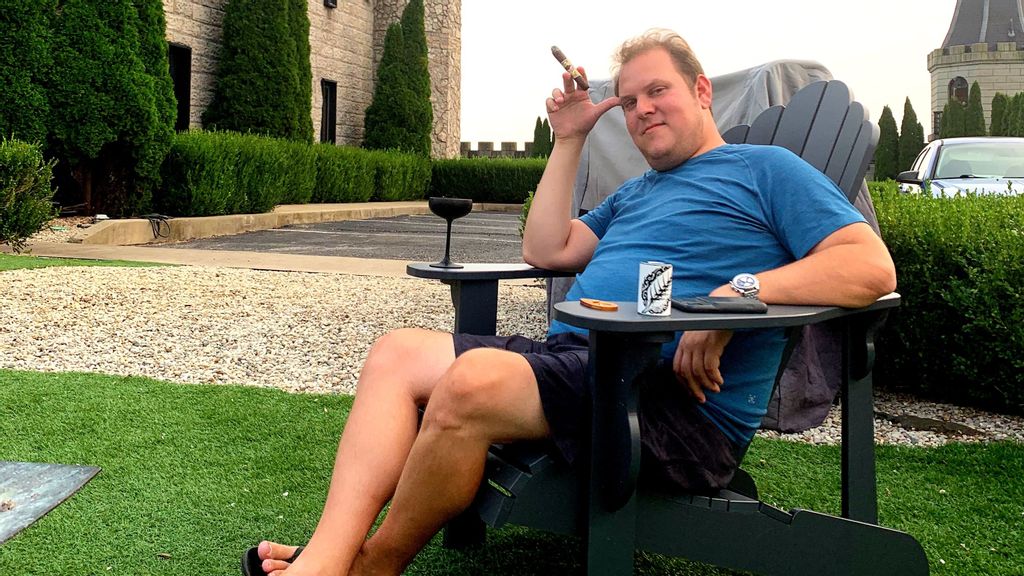 The “GOAT” of hotels tells Zenger how he’s on track to be the #1 travel agent in the world.
The post Meet The Travel Agent Who Made More Than $250K During The Travel Industry’s Pandemic Lull appeared first on Zenger News.

When the pandemic docked cruise ships and all but emptied airports, one Miami-based travel agent found a way to boost his bookings and earn four times the national average of travel-agent commissions this past year. Based on the past six-months of bookings, he is on track to earn $1 million in commissions in 2021.

This is the story of an outsized character, who is an outlier in almost every way, who managed to do what many of his peers thought was impossible—make real money in a declining industry. It is also the story of supercars roaring down highways in the bayou, quiet deals in Japanese restaurants, and a late-night call to a lawyer tasking him to deliver 24 pillows to a Manhattan hotel room.

It is not exactly a good time to be a travel agent. The travel agency business has been thoroughly disrupted by the Travelocity, Hotel Tonight and hundreds of other online sites that auction off plane seats and hotel beds. Do-it-yourself online bookings assure the lowest prices for planes and hotels. As a result, fewer people than ever before use travel agents. Consider: 82% of all U.S. travel bookings were made without human interaction, usually via an app or website, according to a 2018 Condor Ferry survey.

Meanwhile corporations have been cutting ties with travel agents. Even legendary travel agencies, such as Carson Wagonlit, have been completely rebranded.

Zenger News reviewed commission statements and hotel records to verify Eisen’s earnings and found that he has averaged $78,832 per month in commissions alone, based on year-to-date earnings.

So how does a guy, new to the travel agency business, rake in record returns in a dying industry during a pandemic?

It wasn’t easy. Eisen was expecting his biggest month ever in March 2020. Then Covid-19 struck. Cancellations poured in. Few people dared to leave their self-imposed quarantines. In those first months of Covid-19, Eisen’s income dropped from $21,000 per month to less than a $1,000.

At first, Eisen stared out the windows of his 27th-floor Miami apartment, waiting for things to change. Like everyone else, he felt isolated and anxious.

Then, he began asking himself this question: In every crisis hides opportunity. What’s the opportunity for the travel business during the pandemic?

The more he thought about his customers, the more he realized they were special. They had money and an appetite for risk. He had met many of them during his years running road rallies of supercars. Is the guy with three Ferraris really afraid to travel?

He had to find out. So he started sending emails, firing off texts and making phone calls. He said he understood they were bored and homebound. But wouldn’t they like to hear about a great deal from a desperate hotel on a paradise island?

Next he became an expert in ever-changing travel restrictions. He spent hours online reading mind-numbing fine print. He knew which cities, states, or countries were still open to travelers and what documents or tests were needed to go there.

When a Nashville-based music mogul became stranded in Australia due to Covid-19 restrictions, he picked up the phone to call Eisen, who answered at 2 a.m. “He started booking flights immediately. My wife and I went to a hotel for a few hours, and the next minute we’re on a fight back to America. He found a way before anyone else could do anything,” Wesley Campbell said to Zenger.

Campbell, who manages a famed Australian Christian rock group called the Newsboys, later stopped a would-be hijacker on a Delta flight that Eisen had booked for him.

Eisen soon realized that he could uncork a niche market by focusing on the needs of champagne customers. He thought obsessively about his customers and what made them different from other people. Then he thought about what he could uniquely offer.

It started with cars. He knew that his clients liked to drive. “Cars are by their nature very social distanced, so the fact that many of my clients are willing to drive, leaves them more open to travel during Covid-19 since they don’t have to board planes,” said Eisen.

Other clients, he learned, had their own jets. That meant that the only people in the aircraft are themselves and a pilot, who is usually a longtime employee.

By avoiding public airports, he could steer his clients to stay in large hotel suites, which also created social distance. Some of them have spent $15,000 per night on hotel suites, Eisen said. “This led to an increase in sales as more guests purchased larger hotel rooms at higher cost to be more socially distant,” he said.

Considering all these factors, he realized he could put together luxurious and safe travel packages for his clients. He had devised a strategy built around Covid-19 restrictions and the unique qualities of his clients.

It worked. “By June I had restored about 60 percent of my business, and by October 2020 we were back at 100 percent,” he told Zenger. Andavo Travel later recognized Eisen as one of the agency’s top earners, naming him to their “president’s club” for 2020.

Eisen is an accidental travel agent. After a stint as an IT professional, Eisen developed a taste for supercars — and met many equally enthusiastic owners of supercharged engines. Soon he began organizing his own road rallies, private parades of Maseratis, Bentleys, Morgans, and Ferraris. After a couple hundred miles traveled each day, the group would repair to a luxurious hotel. Eisen found himself negotiating the hotel bookings, sometimes group contracts for 100 rooms at a time. Eventually he opened LuxRally to manage all of the details of these automotive excursions for a single fee.

While LuxRally participants were there initially for the exotic car rallies, Eisen would frequently get travel questions for life beyond the rally. He didn’t even think of taking commissions until participants started bringing it up.

“I had spent years driving around the country, looking at great hotels for rallies, and traveling as a hobby,” said Eisen. “Any city in the United States, I can pretty much within seconds name off the best hotel in the area.”

And, he had learned a lot about the hotel business from his frequent stays at Washington, D.C.’s Mandarin Oriental hotel. There he befriended the hotel’s concierge, Alexander Ireland, who gave him an insider’s tour of the hotel industry and its negotiating practices.

“I met this kid who knew exactly what he wanted and knew how to get what he wanted. He saw luxury in his life even as a 19-year-old kid who walked into the hotel by himself,” Ireland told Zenger.

“He knows how it feels to make a client happy because he was in that position. He’s the person hotels need to wake them up,” Ireland said.

With his extensive personal knowledge and frequent requests for help from his supercar-driving friends, Eisen found himself in the travel business. After outgrowing a few local agencies, Eisen joined Andavo Travel, a Virtuoso Agency. Virtuoso agencies are part of a consortium of Luxury Travel Agencies . “What Sotherby’s is to real estate,Virtuoso is to travel,” Eisen said.

By the end of 2019, his commissions were approaching those that he earned in his IT business. Seeing the opportunity, he aggressively expanded his book of business. He met clients for dinner at pricey Japanese restaurants or joined them on high-octane jaunts through the Louisiana marshes. Other clients came to him by recommendations from existing clients. He didn’t take them all. Some didn’t travel enough; other fat cats didn’t want to be big spending whales. Used to gauging people by the kinds of cars they drive, Eisen said, he went from booking for people with Mercedes AMGs to Paganis, which start at $3 million.

“I knew how a hotel sets its rates. I knew exactly the emotions of a sales manager, and how he got paid. I knew what to ask for and when, and how to massage the word ‘yes.’” he said. “In my business the word ‘no’ should basically be reserved for anything that is illegal or unethical. ”

And Eisen almost always says yes. One client wanted 42 brand-new pillows in his Manhattan hotel room. But the hotel wouldn’t send its concierge shopping. So Eisen called a Manhattan attorney and offered to pay his hourly rate ($700) to buy the pillows and deliver them in three Ubers. There were too many pillows to fit in one Uber, Paroly said. He delivered 24.

Another foreign couple wanted to smoke in the spacious hotel suite, a no-no for the hotel. Then, Eisen reminded the manager about the tens of thousands of dollars per night that the couple was spending. Ashtrays appeared in their suite.

“One of the significant things I learned is that essentially you are competing against two factors, Expedia at the low-end, and American Express at the high end, group bookings were really up for grabs. The way to beat Expedia was to provide personalized customer service, otherwise inaccessible benefits, and suggestions that weren’t driven only by commissions,” he said.

Instead of using software to scrutinize hotel rates, Eisen studies the customer instead. Does he need to be recognized by name when he shows up at the front desk? Does she need a personal shopper or a last-minute Michelin-star restaurant reservation?

One high-end client said he felt like a king when he entered the Mandalay Bay Las Vegas after a strenuous flight. “I took one step into the hotel and was handed a dirty martini, made exactly how I like it,” said Aaron Paley, a longtime client of Eisen, to Zenger. “I always sleep with a certain kind of pillow, and of course as I walked into the room those pillows were on the bed. Everything was done down to the detail.”

Eisen’s attention to the smallest details has pleased a multi-generational clientele. “My whole family uses him now,” Paley said.

“I have probably lost thousands doing this in the short-term, because prioritizing client requests over hotel rates are not always the most profitable to me as an agent, but in the long-term it has made for an everlasting customer lifecycle, in a way I consider it a fiduciary duty,” Eisen said.

In competing with American Express, the answer was simple for Eisen. American Express doesn’t negotiate discounts for their high-end clients— while Eisen does. He is able to get 25-50 percent off on some occasions; in one case he saved a client over $400,000 on a single group contract.

“Hotels hate negotiating with me,” Eisen said. “But I have gotten so big that you almost can’t afford not to.”

The post Meet The Travel Agent Who Made More Than $250K During The Travel Industry’s Pandemic Lull appeared first on Zenger News.

Dear @cdc @fda, if boosters are a good idea, great, but, maybe vaccinating kids like my 11 year old might help curtail the spread a bit better?

Can you hook me up, please?
View on Twitter
0
0

@BelkissObadia @RandPaul @cdc 1. Not a photo of Paul being vaccinated for COVID; 2. He is not anti-vaccines, he simply says people with previous infections have better immunity than vaccinated people with no prior infection - this has been confirmed
View on Twitter
0
0