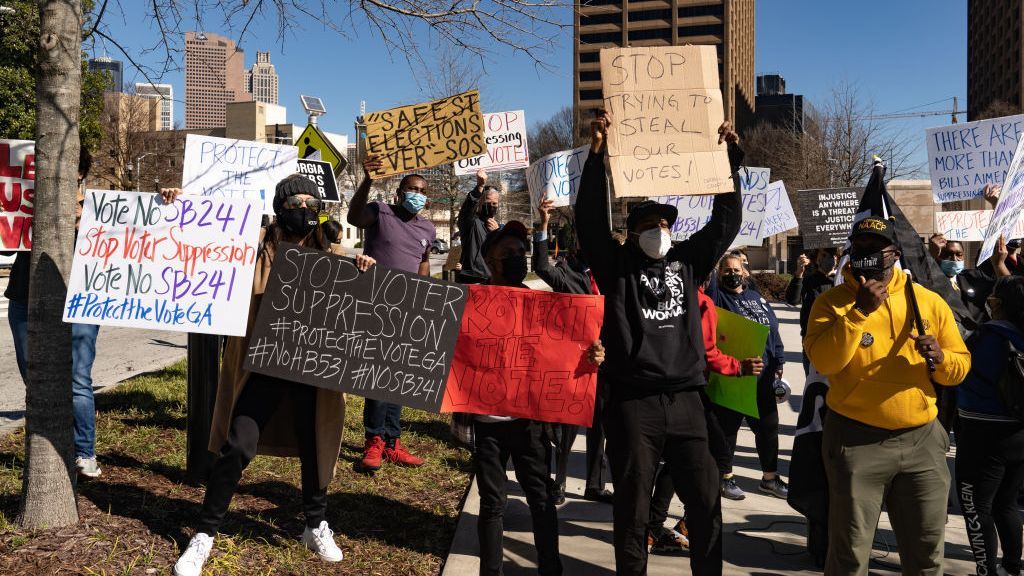 African American Democratic election officials say new state laws are already being used by Republicans to fire them
The post Georgia Democrats Back AG Garland’s Lawsuit On Voting Laws And Say They Are Being Purged Over Race appeared first on Zenger News.

Democratic elections board members told Zenger that they were fired as soon as Gov. Brian Kemp, a Republican, signed a new law that he said was about “election integrity,” but which opponents have called racial voter suppression.

Garland announced last week that the U.S. Department of Justice was bringing a federal lawsuit against the Georgia Election Integrity Bill.

It contains a series of measures passed by the state House and Senate and signed into law by Kemp on March 25, and which was originally known as Senate Bill (SB) 202.

Among its most high-profile measures are a ban on distributing water to voters waiting in line and stripping Georgia’s secretary of state of many of the office’s powers to oversee elections.

The current secretary of state, Brad Raffensperger, certified Joseph R. Biden’s narrow win the November presidential election in the face of claims from then-President Donald J. Trump and his supporters of widespread fraud, none of which have been proven in court.

Democrats say the legislation was prompted by those fraud claims and by racial animus after a record turnout in the state by African American voters, thanks to intensive organizing by Stacey Abrams, the party’s failed 2018 gubernatorial candidate. Biden called the act “the new Jim Crow.”

Republicans, including Kemp, say the Jim Crow claims are a smear and that the act is intended to “make it easy to vote and hard to cheat.”

Another provision hands control of local boards of election to county commissioners, instead of members being appointed by both parties. It is the part of the act which has had the most immediate effect.

A series of African American elections officials have told Zenger they were fired from local elections boards as soon as the law came into force, and said they believe they were purged for their race and their party affiliation.

“I was the newly elected chair of the Spalding County Board of Elections and I was removed without cause,” said Vera McIntosh, 80, who had served on the board since 2019. McIntosh said she lost her job as soon as Kemp signed the law but did not learn about her removal until the board’s next meeting on April 21.

“I think what has happened to me is absolutely against my constitutional rights. We tried to function as a non-partisan group. We tried to do the right thing,” said McIntosh, adding that she and other elections officials joined meetings via Zoom to get through the pandemic.

In addition to McIntosh, other Georgia elections officials who have been removed include Helen Butler, who was one of the five members of the Morgan County Board of Elections for more than a decade, said she had been targeted.

Butler, 72, an African American appointed by the Democratic Party to the role, told how she was removed as soon as an additional new law, signed by Kemp alongside SB202, allowed the Morgan county board of commissioners to fire the entire board.

Also removed from the board was Avery Jackson, another African American Democratic appointee.

“First they removed my entire board, that had two Blacks and three whites,” Butler said.

“Then they brought back the chairman and one Black. So now there are four whites and one black on the board.”

Butler is the executive director of the Georgia Coalition for the People’s Agenda, which was started by the Civil Rights campaigner Rev. Dr. Joseph Lowery. She said regardless of the outcome of the federal lawsuit she is in this battle for the long haul.

“We are going to continue to educate voters and find people to elect who will do the right thing,” she said. “People are making the connection between lawmakers who want to do the right thing versus those who don’t.”

Lonnie Hollis, Vice-Chair of the Board of Elections, who is a Black Democratic appointee, will be fired along with the rest of the board by January 1, 2022, and replaced by a new board appointed solely by the Republican-controlled county commissioners.

“I think it is a blow against Black people,” Hollis told Zenger.

“I have been on the elections board since 2013, and I am the only third Democrat to be on the board,” she added. “They want to get rid of me because I talk, and I am outspoken. I was put on the board by the Democratic Party.”

“I just want the lawsuit to get rid of these Jim Crow tactics. I grew up in LaGrange, I moved away but then I came back to Georgia in the early 1970s. These people think that they can do anything, because the Blacks don’t complain,” she said.

Garland cast his lawsuit as the first of many he expects to bring to uphold voting rights in the face of what Democrats have said is an attempt to suppress their voters.

“This lawsuit is the first step of many we are taking to ensure that all eligible voters can cast a vote; that all lawful votes are counted; and that every voter has access to accurate information,” said Garland in a statement.

Kemp called the attack “lies” and linked it to the failure of Democrats so far to pass the national Senate Resolution One on voting rights and elections reform which Republicans filibustered earlier this month.

Kemp said: “This lawsuit is born out of the lies and misinformation the Biden administration has pushed against Georgia’s Election Integrity Act from the start.”

“Joe Biden, Stacey Abrams, and their allies tried to force an unconstitutional elections power grab through Congress — and failed. Now, they are weaponizing the U.S. Department of Justice to carry out their far-left agenda that undermines election integrity and empowers federal government overreach in our democracy.”

The decision by Garland to sue Georgia first emphasizes the ferocity of the political battle over the state, which had last voted for a Democrat for the White House in 1992.

For decades the real power base in Georgia was not Atlanta — where a large number of African Americans live — but it in the smaller counties which are heavily white and held by Republicans.

But there was a shift during the 2020 elections because more minorities have moved to counties beyond Metropolitan Atlanta. Democrats and African American voting rights groups see the shifting demographics as one of the reasons for the new Republican electoral law.

“There are attacks against voting going across the country and what is going on in Georgia is really egregious. Prior to the law there were two Republicans and two Democrats [on each county BOE]. The new law allows one party to control who sits on the board.

“Our voting rights are being attacked by autocracy and not democracy.”

But African American Republicans say Democrats are wrong to attack the electoral law.

Raynard Jackson, a Republican activist who is African American, said that the lawsuit should be thrown out because “there is not one mention of Black folks Georgia it applies to everyone.

“If there was a Beyoncé concert and Pooky and Raheem were picking up tickets, and they received an email that the concert was canceled, don’t you think that they would pick up the phone and verify this information. They can do the same thing in terms of voting,” Jackson said.

“I still support a two-party system, but the Democrats must think that Blacks are too stupid and can’t follow the rules on how to vote. This is insulting.”

An earlier version of this story did not make clear which legislation was used to fire the Morgan County Board of Elections. It was HB162, which is distinct from SB202.

The post Georgia Democrats Back AG Garland’s Lawsuit On Voting Laws And Say They Are Being Purged Over Race appeared first on Zenger News.

@lmlTN @SerpinaLonghaul @tis_ellecharlot @DrCSWilliam @cdc Doc/researcher or “expert” here and this is not accurate. Breakthrough cares are much greater than expected. Efficacy studies (lab data) was the basis of the emergency authorization. Outcome measures were based on virus presence and the original variant. We need more data.
View on Twitter
0
1

@Dr_Servoss @jpummil @CDCgov @CDCDirector I wish that @cdc would recommend universal masking in high transmission areas. Otherwise, we are going to continue to have increased community spread. The longer they wait, the worse it gets . . . . .
View on Twitter
0
2