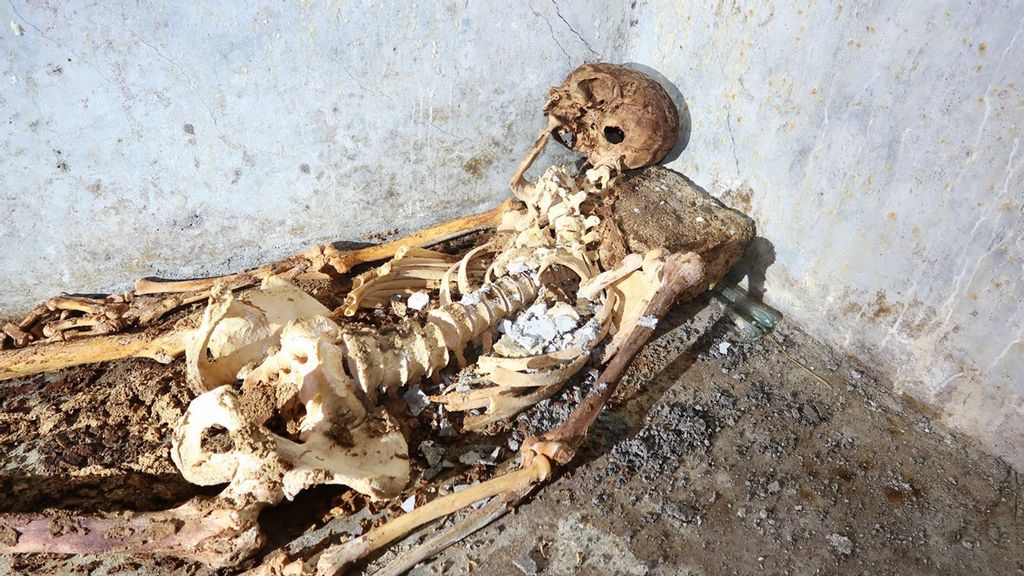 Archaeologists also discover first evidence that performances were conducted in Greek in the ancient city.
The post 2,000-Year-Old Human Skeleton With Hair Found In Pompeii appeared first on Zenger News.

Achaeologists say mummified remains, including hair, bones and an ear, are one of the best-preserved skeletons ever found in the ancient city of Pompeii.

The remains found at the necropolis of Porta Sarno are identified as those of Marcus Venerius Secundio, a public slave and custodian of the Temple of Venus who later was freed and joined priests dedicated to the imperial cult, according to a press release from the Pompeii website. Cult members regarded emperors as gods.

A marble slab on the tomb has a commemorative inscription to Secundio, who was believed to have been older than 60, and the inscription “makes reference, extraordinarily, to performances at Pompeii that were conducted in Greek, direct evidence of which has never before been found,” an Aug. 17 press release from Pompeii states.

The tomb structure, officials say, dates to the final decades of life in the city, which was destroyed by the eruption of nearby Mount Vesuvius in A.D. 79.

When he was a priest, Secundio carried out performances (“ludi”) in both in Latin and Greek for four days, the inscription on the tomb says.

The performances were public games held to entertain the public, said Gabriel Zuchtriegel, director general of the Archaelogical Park of Pompeii.

“That performances in Greek were organized is evidence of the lively and open cultural climate which characterized ancient Pompeii,” he said.

The findings suggest that Pompeii was a multilingual city where cultures from the Eastern Mediterranean mingled.

Archaeologists believe that the tomb was decorated with a blue background and paintings of colorful plants covering the walls of the rectangular structure.

During the excavation, archaeologists also found two cinerary urns, one of which was described as “a beautiful glass container” that belonged to Secundio’s wife, who was referred to as Novia Amabilis (“kind wife”).

Secundio’s burial was unusual, archaeologists said, because generally only small children were interred; others were cremated.

“We still need to understand whether the partial mummification of the deceased is due to intentional treatment or not,” said professor Llorenç Alapont, an archaeologist from the University of Valencia. “Analysis of the fabric could provide further information on this.

“Even for those like me, who have specialized in funerary archaeology for some time, the extraordinary wealth of information offered by this tomb — from the inscription to the burials, the osteological [structure/ function of the skeleton] finds and the painted façade — is exceptional,” Alapont said.

Fabrics and biological matter gathered at the site have been sent to the Applied Research Laboratory at Pompeii, where they will be analyzed and prepared for conservation.

“Pompeii never ceases to amaze, and has confirmed her place in a story of redemption as an international role model” said Dario Franceschini, Italy’s minister of Cultural Heritage and Archives. “It is a place where research and new archaeological excavations are taking place once more, thanks to the many professionals in the field of cultural heritage, who with their work never cease to produce extraordinary results for the world which are a source of pride for Italy.”

The excavation and recovery operations at the Pompeii site were carried out by the University of Valencia, coordinated by Alapont, along with archaeologist Luana Toniolo, restorer Teresa Argento and anthropologist Valeria Amoretti of the Archaeological Park of Pompeii.

Edited by Judith Isacoff and Matthew B. Hall